There is no doubt that Google Analytics is one of the most important tools you could use to understand your users’ behavior and measure the performance of your site. There’s a reason it’s used by millions across the world.

But despite being such an essential part of the decision-making process for many businesses and blogs, I often find sites (of all sizes) that do little or no data filtering after installing the tracking code, which is a huge mistake.

Think of a Google Analytics property without filtered data as one of those styrofoam cakes with edible parts. It may seem genuine from the top, and it may even feel right when you cut a slice, but as you go deeper and deeper you find that much of it is artificial.

If you’re one of those that haven’t properly configured their Google Analytics and you only pay attention to the summary reports, you probably won’t notice that there’s all sorts of bogus information mixed in with your real user data.

And as a consequence, you won’t realize that your efforts are being wasted on analyzing data that doesn’t represent the actual performance of your site.

To make sure you’re getting only the real ingredients and prevent you from eating that slice of styrofoam, I’ll show you how to use the tools that GA provides to eliminate all the artificial excess that inflates your reports and corrupts your data.

As most of the people I’ve worked with know, I’ve always been obsessed with the accuracy of data, mainly because as a marketer/analyst there’s nothing worse than realizing that you’ve made a wrong decision because your data wasn’t accurate. That’s why I’m continually exploring new ways of improving it.

As a result of that research, I wrote my first Moz post about the importance of filtering in Analytics, specifically about ghost spam, which was a significant problem at that time and still is (although to a lesser extent).

While the methods described there are still quite useful, I’ve since been researching solutions for other types of Google Analytics spam and a few other threats that might not be as annoying, but that are equally or even more harmful to your Analytics.

Let’s review, one by one.

Ghosts, crawlers, and other types of spam

The GA team has done a pretty good job handling ghost spam. The amount of it has been dramatically reduced over the last year, compared to the outbreak in 2015/2017.

However, the millions of current users and the thousands of new, unaware users that join every day, plus the majority’s curiosity to discover why someone is linking to their site, make Google Analytics too attractive a target for the spammers to just leave it alone.

The same logic can be applied to any widely used tool: no matter what security measures it has, there will always be people trying to abuse its reach for their own interest. Thus, it’s wise to add an extra security layer.

Take, for example, the most popular CMS: WordPress. Despite having some built-in security measures, if you don’t take additional steps to protect it (like setting a strong username and password or installing a security plugin), you run the risk of being hacked.

The same happens to Google Analytics, but instead of plugins, you use filters to protect it.

In which reports can you look for spam?

Spam traffic will usually show as a Referral, but it can appear in any part of your reports, even in unsuspecting places like a language or page title. 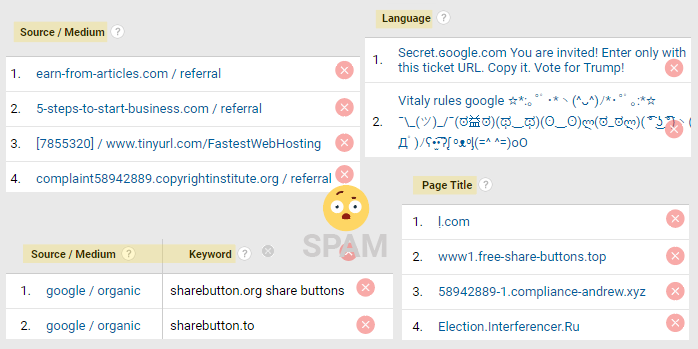 Sometimes spammers will try to fool by using misleading URLs that are very similar to known websites, or they may try to get your attention by using unusual characters and emojis in the source name.

Independently of the type of spam, there are 3 things you always should do when you think you found one in your reports:

Never visit the suspicious URL. Most of the time they’ll try to sell you something or promote their service, but some spammers might have some malicious scripts on their site.
This goes without saying, but never install scripts from unknown sites; if for some reason you did, remove it immediately and scan your site for malware.
Filter out the spam in your Google Analytics to keep your data clean (more on that below).

If you’re not sure whether an entry on your report is real, try searching for the URL in quotes (“example.com”). Your browser won’t open the site, but instead will show you the search results; if it is spam, you’ll usually see posts or forums complaining about it.

If you still can’t find information about that particular entry, give me a shout — I might have some knowledge for you.

A bot is a piece of software that runs automated scripts over the Internet for different purposes.

There are all kinds of bots. Some have good intentions, like the bots used to check copyrighted content or the ones that index your site for search engines, and others not so much, like the ones scraping your content to clone it.

Read more about this at tracking.feedpress.it.